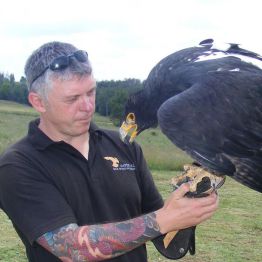 Nigel is the former owner and director of the Imperial bird of prey Academy, he started the buisness in 2011 and has made it the success it is today. He has now begun a new adventure at the start of 2017 with his brand new extoic animal buisness.

Nigel's passion for birds and British wildlife started at the age of ten and by the age of twelve was the proud owner of his first Sparrowhawk. This was the start of his fascination of birds of prey and over the next 20 years Nigel became an influential and well respected member of the falconry community and well known throughout Britain and Europe primarily due to his knowledge of accipiters. His dedication to falconry has taken him to different countries around the world and he has drawn on the knowledge and experiences of falconers from places such as China, the Americas, South Africa, Turkey, Holland, Germany and France.

From 2004 - 2007 Nigel held the position of Centre Manager at Eagle Heights bird of prey centre in Kent and during the summer of 2009 spent the season based at Africa Alive, Suffolk, with a team of African raptors providing flying demonstrations for the general public. Nigel has also worked for ZSL London Zoo on their Animal Activities Team.

Nigel has featured on programmes with the BBC and Sky one, lectured for schools colleges and universities and provided entertainment for many different events. One of his highlights of his career so far was the Raisa Gorbachev Foundation Charity Ball in 2007. Nigel has trained birds to work in the movie industry and specialist photography and has written articles for magazines in the UK and Europe.

Working with African raptors has become Nigel's main focus and over the last few years he has spent a lot of time educating people on the plight of these birds and the dangers that they now face. Having spent time in South Africa at Dullstroom Bird of Prey and Rehabilitation Centre he observed this first-hand.

Nigel has a wealth of wildlife knowledge he enjoys sharing with others and this is evident in his display work and lectures. He has a gift for sparking people's enthusiasm and interests in wildlife.

Nigel is one of the first names down for demonstrational work in the UK and all of Europe. 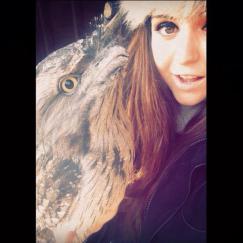 From a young age Mollie has always had a passion for wildlife, birds of prey in particular. She had a great deal of experience with all types of animals in established working environments. However, she finds her heart is glued to Birds of Prey.

She has grown up around raptors due to her father being a highly recognised and acclaimed performance falconer for the last 35 years.

Mollie has 3 years worth of sales experience; face to face and over the phone-both in England and abroad. She also had a small stint working in retail establishments whilst finishing further education -although, She has always had an underlying ambition to work with birds and animals within the education sector. She dedicates herself to animals and working with them to both learn and conserve.

Mollie's father, Nigel King is a well known falconer and has worked all over the world promoting conservation and educating people from all walks of life on birds of prey.

After working as animal trainer at London Zoo, he opened the Imperial bird of prey academy in Essex. Mollie was the previous operational manager of the centre and has watched it grow significantly since opening. We have recently been ranked the no.1 attraction in Billericay which is an amazing achievement.

Mollie has now opened up her own owl centre, the Kent owl Academy, based within Kent Life in Maidstone.